Skip to content
Adventure on the Red Baron Railroad

It’s Sunday afternoon in Crown Hill Village, and I’ve got a train to catch. Luckily, the Red Baron Railroad is just a short walk from my home in Crown Hill.

I’m not bringing a carry-on bag; there would be nowhere to store it. I am bringing my camera. This is definitely going to be an Instagram moment. The train that will be departing soon can’t be boarded, because it’s 1:29th scale. Its route is one lap around the conductor’s yard. If you could hop on board, you wouldn’t get to see much of Crown Hill Village, but, you would get to see a waterfall, a trestle, and a 12-foot suspension bridge named after cartoonist Charles Schultz. 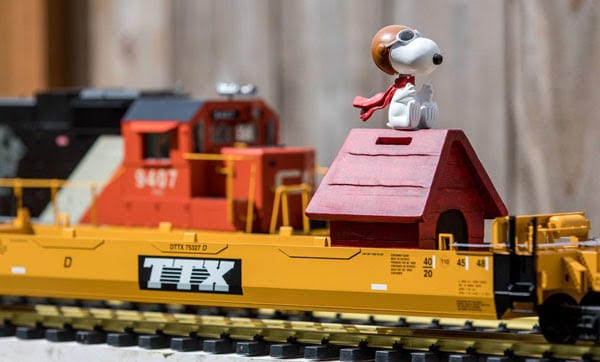 What began as childhood fascination has grown into a sizeable G-scale garden railroad project. Named after Snoopy and the Red Baron (from the Peanuts comic strip), the railroad is the creation of a Crown Hill Village resident named Nicolas who started building it back in 2017. A few random times a year, for a small local audience, Nicolas starts up his battery-powered trains and draws curious neighbors to enjoy the sights and sounds for several hours. On Halloween, treats are delivered to trick-or-treaters via rail service. In December, a train is decorated with colorful miniature lights to deliver some extra holiday cheer.

Like our own neighborhood, this railroad is always changing. Nicolas has planned a number of landscaping and construction projects. To see photos and videos of the trains in action, visit the Red Baron Railroad Facebook page. 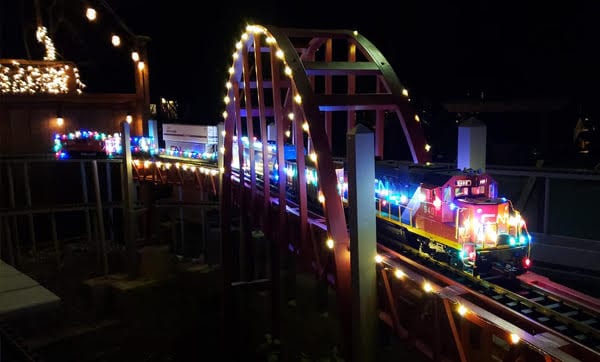